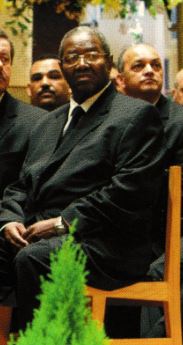 "Top cleric Apostle George Ngqunge is leaving the New Apostolic Church after 20 years to go into farming. Rev George Ngqunge looks to farming after ‘serving others’ for 26 years.

AFTER winning souls for the last two decades, a cleric instrumental in building one of South Africa’s largest churches is to retire from the pulpit.

Once he has finally waved his congregation goodbye, George Ngqunge of the New Apostolic Church will walk away with the distinction of heading up more than 30 churches in the Eastern Cape, as well as several others in Namibia. “Anyone who will fills my shoes must be prepared to serve people; they want to be served with respect.

“You must serve them as the children of God and not try to be their king, but be their servant,” said Ngqunge about his retirement yesterday.

Apostle Ngqunge spoke about a host of issues including those in leadership positions in the country. He said these leaders needed to remain humble.

“It is the people of God who are important, we are just servants, we cannot want to be served as leaders, those are the things that create misunderstandings in the church,” he said. Ngqunge accepted his calling in 1981 when he was ordained a pastor.

Seven years after his ordination, he was made an Apostle. “(Since then) I have travelled more than five million kilometres day and night, preaching the word of God; it was an experience because I had to go to funerals to attend to the needs of the congregants.”

“There were times where I had to sacrifice living with my family and serve the people of God. It was not nice but this was a calling, now I am going to rest and leave with my wife,” said Ngqunge.

Ngqunge, who has had asthma since childhood, said he was grateful to God that he was still in good health.

“When I started serving the Lord I was asthmatic and I can say now the Lord has been faithful.

“I want to go and rest now someone else will take over. My wife is delighted that I am going to stay at home with her because she was always alone,” he said. His wife, Nothobile, said she was over the moon about her husband’s retirement.

“I am feeling very good, and I am looking forward to it.

“I am also retiring in five months time. It was lonely without my husband at home but because he was doing the Lord’s work I understood,” said Nothobile.

Ngqunge and his wife said they have planned their retirement very well. “We are going to be involved in farming, and go on short holidays together. We are also going to visit our relatives because my husband did not get to see much of them, either,” said Nothobile."